Dad was a proper family man. He left his home in Trinidad and Tobago to work on Texaco ships, sailing across the world.

“He’d be in San Francisco one minute and then in New York the next. He settled in London after meeting my mum.

“He was always there to help his children and grandchildren. We first noticed he was having problems with his memory and kept falling. One day he fell backwards on the road and just lay there with people walking around him, thinking he was drunk. Thankfully a passer-by helped him to his feet, but it was clear there was something seriously wrong. 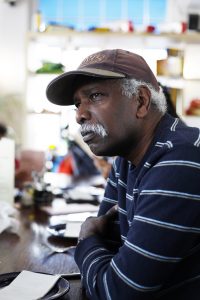 “My sister took Dad to the GP. After conducting some memory tests, the GP said he may have dementia and referred him to a specialist who confirmed this diagnosis. Months went past but we were still not convinced we had all the answers. His falls were becoming increasingly frequent and his eyes would often close.

“We went back to the GP who referred Dad to a neurologist at St George’s Hospital. After scans and tests, in 2015, Dad received his diagnosis of PSP. I’ll never forget that day. We had no idea what PSP was. At the time we thought it didn’t sound too bad and was something we could manage. Once I got home my research told me otherwise.

“We didn’t tell Dad everything about the condition. But he knew enough – he certainly knew he wouldn’t recover and would likely get worse. His speech had started to slur, something he really hated. At the time Dad was living by himself in a flat. There were lots of stairs and it was becoming impossible for him. The neighbours really looked out for him and when they saw him coming they’d come out and push him up the stairs so he didn’t fall backwards.

“A major fall resulted in Dad being admitted to hospital. We were not happy for him to be discharged home to the flat so he moved to Sheltered Accommodation. He had carers, but our family made frequent trips to visit him because we knew more about the care he needed.

“Dad having PSP forced me to push myself to become even more independent, so that I could be in the best position to help Dad. Dad needed to attend many hospital appointments so I learnt to drive. I told Dad that he was the motivation behind me taking my driving test. I have tried before, but Dad’s condition gave me the commitment I needed to see it through to the end.

“PSP affects everyone in the family. No one emerges from it unscathed. Watching Dad deteriorate was tough on my eldest son. He knew granddad from before PSP and so could see how it was affecting him.

“He was very emotional and always wanted to help. When he was younger he’d stay at dad’s flat a lot. Dad would spoil him with endless supplies of coke, donuts and chicken wings!

“Dad was always there for me. He’d help with the cleaning, shopping and would always be on hand to look after the boys. I don’t know what I would have done without him. He’d did the same for my sister’s kids. He was very family orientated.

“We managed PSP as a family. That comforts me now – that he didn’t have to face it alone. Dad loved the Notting Hill Carnival and would go every year. This was something we were determined he should continue. His last carnival was in 2017. All the family were there. It was difficult, but well worth it. I remember telling him that we would always look after him. This year we will be wearing t-shirts printed with Dad’s photo on for the carnival. He will be very much with us and in some way, still a part of this special event.

“With PSP there is always something to worry about. Every day I thought about his progression. None of us wanted to get to the end stage of PSP. Before he died we wanted him to have a PEG, and we’d try to feed him up so that he could build his strength up. Being told that he was too weak for a PEG brought us back down to earth with a bump. It was then we realised we were close to our final days with Dad.

“Dad knew he was loved. He deserved every bit of it. He was the best Dad and shall be greatly missed.” 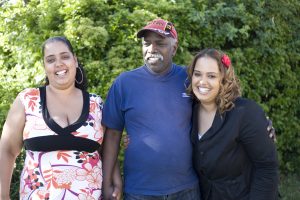